Back to Community -- How we are related 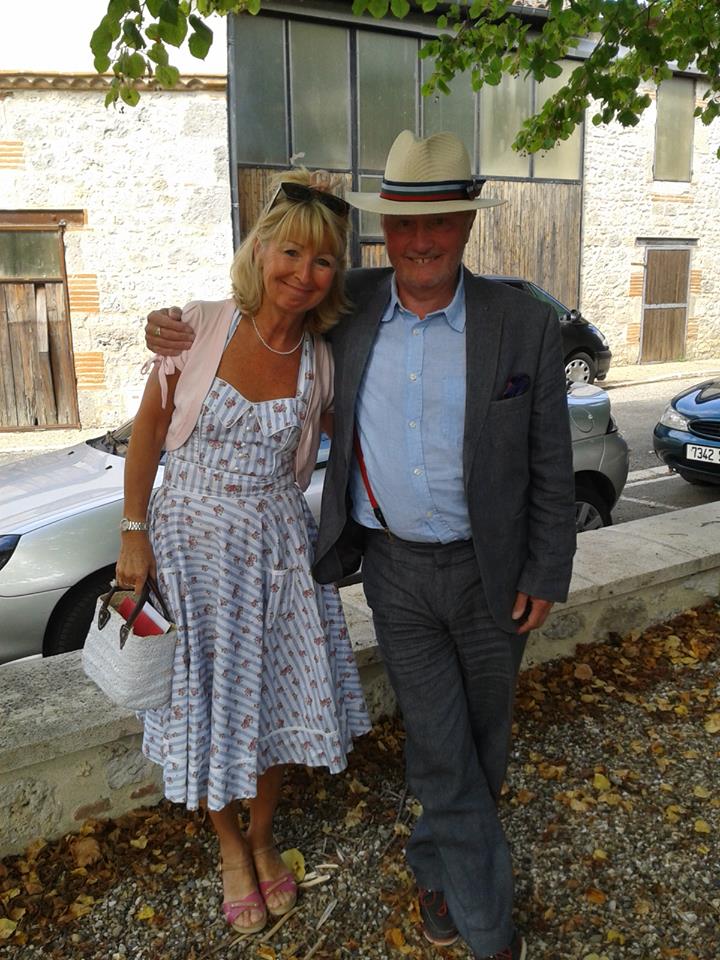 Johanna Dowling and husband Phillip Strugnall - he was born a girl and then changed at about 12 yrs old. Violets sister 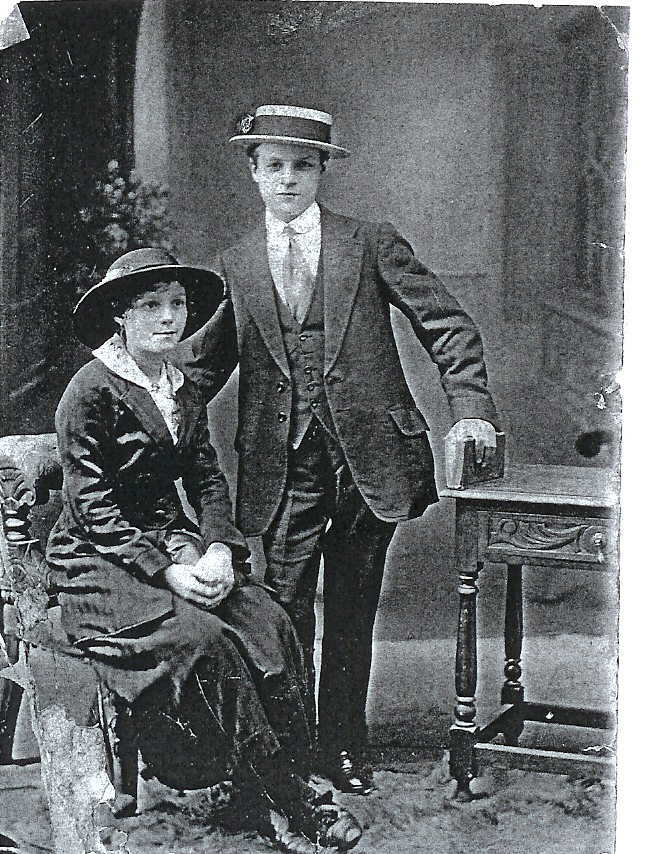 The medals were 'kosher' as WW2 medals did not have names on- WW1 ones did have and even my 'gifts' from the Queen do not have my name on.

My sons I believe (NI + Iraq and Afghan) may not have his on. Which battalion did your brother serve with ? as I have at least three friends who served in 1 RGJ in the 70's.

As a Fusilier my only comment is that 'what do the RGJ know about anything'. I am safe with a comment like that as your brother is a long way away. Brave !

In WW2 medals were not issued unlike WW1 - you had in WW2 to request them and my parents decided that medals were not their thing so did not ask for them. As their last living relative ( they died many years ago) I requested them and found that my Dad had 3 and Mum 2.

I will send a photo of the grand fathers medals (John Dowling) sometime soon.

Seems like he was in the Persian arena as per this link for Paiforce.

I think you have read the docs well, he appears to have joined the Sherwood Foresters as a regimental cook or just as a rifleman the transferred to the A C C as a proper cook. He certainly had a very busy war but I cannot see exactly what he was hospitalised for. Do you have his medals?

I will look again in the near future to see if anything else shouts out , but this does ! Your family were living in Lambs Conduit Street and so was my family. Cousin Kathleen Dowling remembers then there just after and during the war !

many thanks for the photos of naughty Mr Dowling!. I have now scanned-in the army records for my father Harry Charles Higgs and put them on my website. You'll see I have also added three pages of my hand-written notes which were my attempt at deciphering them! You will probably spot some mistakes!

Received: 28/02/17 David Thanks for that and this is a brief picture of Violets siblings below. Your Violet is definitely 'ours' as looking through my notes of one of my meetings with long lost cousins one of them says' Lily or Alice -married a Higgs ' !! Father John Frost Dowling - Mother Matilda Rachel Merrell

Received: 27/02/17 Not heard from you for a bit but !! Having looked at the marriage cert for Violet and Harry their address at Wren St rang a bell or two . So I looked the street up on Google and lo and behold it is only a few meters from Calthorpe Street. Well so what you may say - however Harry Dowling my fathers elder brother moved into a house in Calthorpe St in late 1939 or 40 with his daughter Kathleen and wife Kathleen. His daughter i.e. my cousin still lives there so what are the chances of two Dowling families living within meters of each other during the war not being related ? Zero? Unfortunately Kathleen my cousin ( and yours?) has had a series of strokes and is bed ridden and has lost a lot of memories so even though has lived there off and on for 70 years remembers nothing about Violet. Kathleen (the cousin) was married to Bill Owen the famous actor (Compo of Summer wine fame). She has a daughter who looks after her also called Kathleen !! and what is more my wife is Kathleen so a few years ago we had a meal there with Kathleen Dowling wife of Harry, with her daughter Kathleen Dowling (then Owen), her daughter Kathleen and my wife Kathleen. I was the only non Kathleen at the meal. Maybe a call / chat is in order cousin? Mike

sent: 22/01/17
if violet is both 'yours ' and 'mine' you have missed out on meeting some of the other cousins in surrey who have sadly passed away in the last few years. jack dowling - lived at Bentley in a care home Horace dowling - lived at Bracknell etc etc

Date: Mon, 16 Jan 2017 17:59:5
From: Mike Dowling To: David Higgs 'fraid not re birth and death certs I spent sometime this afternoon (because its very damp, wet, cold and foggy in Yorkshire today) looking for the records. The only birth record is for a Violet is 1903 Q3 Jul/Aug/Sept D 1b 112. and no death or am I missing something?. My 'idiot' notes suggest the Doreen (see below) told me that Violet was brought up by her mothers (Matilda) sister Ellan or Margaret Wood (née Dowling) in 1911. The John Dowling saga started with his first born John Frederick in 1888 - John Fredericks daughter (he also had 2 sons both died in the 1980s) Jean only died in 2015 aged about 90 in Calne, Wilts only a 5 miles or so from my son in Chippenham. Alas she only found me in 2015 chasing anyone on the Dowling the family ( her father had died when she was very young and was brought up by her mothers side without meeting any Dowlings) and for what ever reason declined to meet me. Strange world aint it ?. Other cousins I have found are Horace, Jack now both dead, a Doreen Sparrow who was the daughter of Adalaide Sewell (née Dowling) who lives in Poole, Dorset and a cousin Kathleen who was the daughter of Harry Dowling mark 2 - There was a Harry Dowling Mark 1 but it is believed he died in not-so- nice circumstances so when ANOTHER boy arrived he was given the name. Odd practice is'nt it?.. I am in contact with a number of children of cousins / half cousins who are my age i.e. 70 ish. Ant mention of a Lily who was disabled and died early or anything else. Where in the world are you / My mobile etc is 07970020770 or 01484685663

On 16/01/2017 15:29 David Higgs wrote: Mike thanks for quick and comprehensive reply. I think I need to do a bit more research before we can settle this. Do you have Violet's birth and death certificates you could let me have (digital copy is fine) else I'll go apply for them and take it from there regards

On 16/01/2017 12:48, Mike Dowling wrote: David We have a number of things in common but I need to establish more about Violet to be sure that we are who we believe we are. My family background is a bit fractionated in that my grand father John Dowling married a Matilda Merrill and produced about 7 children- living in Holborn. He was a bit of a lad since in about 1903/5 he took up with a widow named Catherine Ring who had 2 very young girls whilst still living with his wife . It would appear from verbal history recently gleaned from elderly relatives that both his wife Matilda and his girl friend were pregnant at about the same time i.e. 1903/05 ish. He left his wife and family and lived with Catherine Rogers (née Ring) and goes onto produce a further 6/7 kids one of which was my father. So my Dad and siblings were illegitimate (as was grand dad !!!). In the last few years Violets name became mentioned by family but she is not listed in the 1911 census nor is my father or his siblings from Catherine Ring/John Dowling. In 1914 John volunteered for WW1 at 47 years old and survived being wounded in France - died in 1951 - never met him as I was born in 1947. So is my Violet the same as yours - any further info ?. I live in West yorks Mike

On 16/01/2017 11:49, David Higgs wrote: Hi Mike thanks for emailing me, it's nice to know someone has looked at my website! Yes it looks like John was her father as he has signed as witness on her marriage certificate, you can see it on my website here Violet's husband Harry, was my uncle As you may have read on the site, my father (also named Harry) never spent much time with his brothers so I was fascinated to delve into the family history over the last couple of years to find out more about them. (my other hobby is learning how to build websites so the two combine nicely) I did meet Violet when I was very young but only that time I think. Violet married my father's elder brother Harry Higgs. My father was also a Harry so we always knew Violet's husband as "Big Harry". Hopefully you saw the pictures of them on the site. It's great to make contact with a distant relative, (you are a first cousin to me I think) I wonder if you might have any more photos of Violet or any of Big Harry or any other info on the family? best wishes David Higgs