View in Family Tree - See her photos - See where she lived 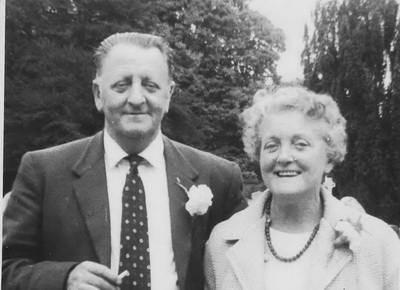 Kitty was born opposite Great Ormond Street Hospital at number 51 (see 833 Baptism).  At the age of five, the family moved to Theobalds Road where they lived for about twenty years.  Her brothers Archibald and John were both born here.

Sometime around 1930 they moved to East Street (which was later renamed Dombey Street).  They stayed here for sixteen years and then Kit married in 1942 and in 1944 moved to Kirk Street, a council flat.

She worked for many years at the Lloyds tobacco factory at the north end of Leather Lane, Holborn. In the 1939 Register we can see her shown as a tobacco worker. More info about the 1939 Register may be found here

In 1942 Kitty married Harry Higgs with her brother Archibald gave her away.  Kitty’s mother (Alice Binning) would not attend the wedding.  (Nor did she go to Arch's or Bob’s wedding).  Three weeks later Harry was sent abroad and they were apart for 2-3 years.

Kitty remembers "My mother had a friend called Ginny Shay who always wore a shawl and an apron and would give Kitty three-pence when she came to visit although she only gave a penny to the boys."

Kitty had a lump and had to go into University College Hospital aged about 19.  She was very worried because her sister Alice Mary had died of cancer in 1947.  Kitty said she peeked at the doctor’s note that said "I hope and presume this is a case of fibroids..."  After ten days kitty left hospital - the diagnosis was cancer.  She was never able to become pregnant.

They moved to a flat above offices in 1950 in Ely Place where they later adopted me, David, and later adopted a brother for me, Sammy.  In 1957 the family moved to Bognor Regis.  After two more moves in Bognor, the family finally returned to London just before Christmas 1970.  They moved finally in 1976 to Tottenham