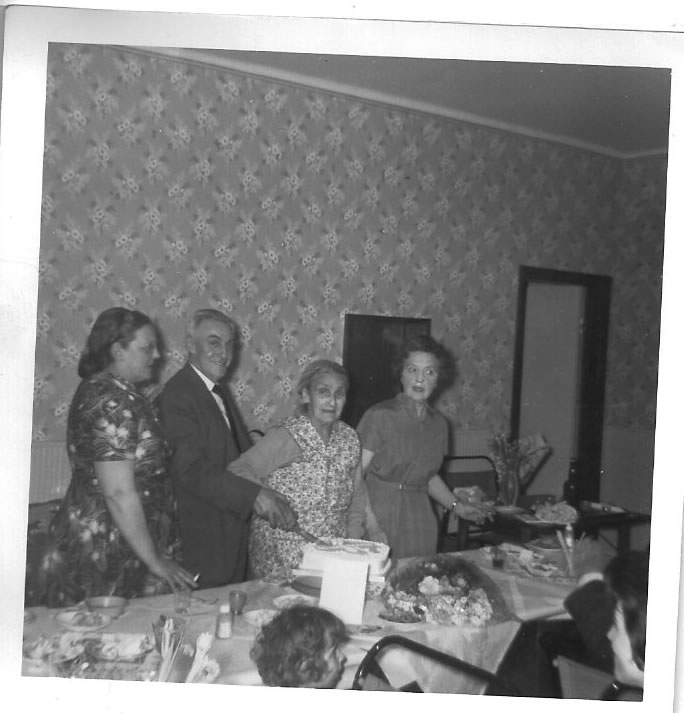 They lived in the same area as my family, Theobalds Road and Kirk Street.

Here we see Annie with her three children, Emily, Jack and Ann at a 90th birthday party, held in a hall near Kirk Street.

"...my nan was Annie Maud Mary Rosson and Emma Higgs nee Rosson was her younger sister ... Aunt Lizzy and Aunt Rose used to visit my nan up until both the old girls died in the early 80*s.. nan lived in Holborn all her life and ended up in Portpool Lane[near Leather Lane] until she died... my other cousin still lives there now" - (Sandra)

"...my cousin sent me thhis photo which shows the 90th birthday of annie rosson [my grandmother] and the elder sister of willie higgs 2nd wife emma it was held in a hall near kirk st where she used to live in holborn before she moved across the road to portpool lane .... the last picture shows her cutting the cake with her 3 children called emily jack and my mum called ann... when i looked at uncle jack i thought he looked very like the photo of harry higgs that was on your tree photos ..... the pictures are a bit hard to make out as they must be 50 odd years old ... there is one on there of 3 kids at the front and i am the one stood in the background looking very sad.... i was an only child and painfully shy .. i wonder if the 2 old dears in the first photo could be aunt lizzie and rose .. i saw the photos you sent of the aunts do you know how old they were when they were taken .... my nan was really small and always wore the pinnie never put her teeth in and never said a lot when we visited .. i was always sent down the lane to get sweets or to go over and see my cousins ...i was brought up in edgware middlesex so dont know the school you are on about ... i will ask my cousin who still lives near leather lane as she is a bit older than me [i am 67]so may remember a bit more as she does remember the aunts lizzie and rose well ...i dont have a lot of photos of the old days ... my parents dont seem to have bothered with a camera much .. anyway keep in touch and if i find anything else that may be of interest i will let you have it .. i dont have any photos of when they were young knowing their life story i wouldnt have thought they could have afforded to do photos ..." - Sandra

Ann is the mother of Sandra - see my Community page